The phased microphone array is becoming a standard method for the investigation of the sound emission of railways, aircraft, and road vehicles. It is the only method that allows an identification of the noise sources when the vehicle is in motion. Wheel-rail noise and aerodynamic noise of railways, airframe noise and installed engine noise of aircraft, tyre-road noise of automobiles are typical examples. The method has improved in the past years with the appearance of data acquisition systems capable of sampling a large number of signals and the use of relatively cheap electret microphones.

The two-dimensional distribution of the sound-pressure level in Figures 1 and 2 show the exact locations of the sound in the area of the rear door and snowflake at different speeds. 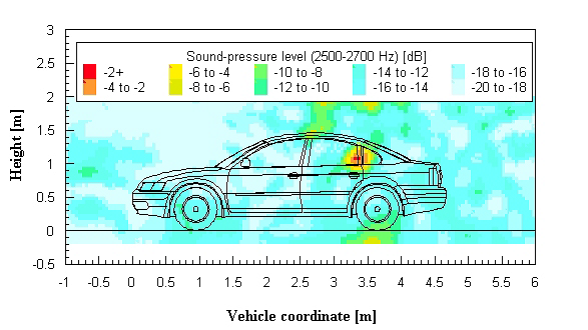 Fig.1: Two-dimensional distribution of the sound-pressure level in the frequency range from 2500 to 2700 Hz measured with the snowflake array during a pass-by of an automobile at 117 km/h with two miniature loudspeakers switched on.

The noise emitted by objects with distributed noise sources can only be reduced if it is possible to identify the dominating noise sources. This can be achieved with phased arrays of microphones. The method was proposed by Billingsley and Kinns and has been used since about 25 years for the localization of sound sources on road vehicles. All possible source positions must be known as a function of emission time. The reception times at the microphones of the array are given as the sum of the emission time plus the various propagation times. The spatial resolution of a microphone array is strongly dependent on the frequency of the sound source under investigation and the distance between the moving object and the centre of the array. 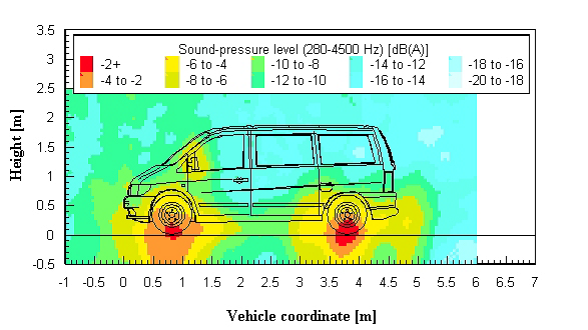 Fig.2: Two-dimensional distribution of the A-weighted sound-pressure level measured with the snowflake array during a pass-by of a van at 176 km/h.

After the recording, the source distribution on the whole surface of the vehicle can be computed. Due to the evaluation for constant time steps at emission time, the data analysis is performed in the source coordinate system and the Doppler frequency shift observed on the ground is removed. The Doppler amplification due to the motion of the sources may be considered in the final results. The two-dimensional distributions of the sound-pressure levels in Figures 1 and 2 show the exact locations of the sound in the area of the rear door and snowflake at different speeds.

The microphone array is a valuable tool to identify the dominating sound sources on moving objects. The Doppler frequency shift is removed in the data analysis. The dominating sources can be determined in each frequency band. A large frequency range can only be covered by using nested arrays (large arrays for long wave lengths, small arrays for small wave lengths). A noise reduction of a single source can be verified even in the presence of other sources.

This localization technic of sound sources on moving vehicles can be achieved by using the LBM method provided by the innovative and performant CFD simulation tool ProLB which is now distributed by POWERSYS Solutions.